A marketing guy from RusVPN asked me for a cooperation. I asked for a VPN account to perform a review about the VPN service. I do not cooperate with VPN services I just use the affiliate links.

On the 21.02.2020 I published a german video review on Youtube claiming that RusVPN has several major flaws:

On the day of the video I opened up a ticket with all my findings but got no answer so far. Instead I got blocked on twitter and some users under my video were behaving badly. My affiliate account has also been suspended.

As far as I could verify on 13.02.2020 the lzo compression (VORACLE) is still active on client side. I also tried to reconfirm the IPv6 leak and tried to reinstall the RUSVPN software again. With this result:

It looks like that RUSVPN developer missed to sign its exe file. Instead of solving the problems, my accounts got blocked and they are unable to sign their software correctly. The new list of fails:

A major concern for VPN software are IP leaks. There are several possibilities how an IP address can be leaked to a website. RUSVPN has decided to not protect its users from the IPv6 Leak. While connected to the internet, your device will normally get the „old“ IPv4 and also the „new“ IPv6. The VPN tunnel is only established on IPv4 thefore the VPN software should make sure that all connections to the internet are going through the IPv4 VPN connection. This can be achieved by disabling IPv6 entirely during an active connection. There is no effective measure inplace which prevents an IPv6 Leak. Your ISP can reveal your identity by using the leaked IP address.

While testing I noticed long loading times. This has been caused by DNS timeouts: RUSVPN did not route the DNS requests to the correct adapter. Instead my PC was asking my router for the IP address. RUSVPN seemed to have blocked such requests to bypass the DNS leak. After several retries, my PC asks the RUSVPN DNS server and finally loads the website. Nevertheless this causes significant delays in the browser and makes the internet slow.

The speeds dropped under 100Mbit/s and the latency loss was unacceptable: the jitter was quite high and if you are using life services like VoIP (Skype) or online gaming you might notice some lag. I tested from Germany and used servers in the Netherlands and Germany to test the speed and the latency.

My genuine internet speed is 500Mbit/s. Without a VPN my latency is as low as 20ms:

While connected to a near RUS VPN server the latency increases to 51ms:

„Mittelwert“ is the average value.

A VPN which concentrates on the Russian market should be able to circumvent and bypass censor firewalls like the Russian one. RUSVPN is making major mistakes on this side: They use the easy to detect standard OpenVPN Port 1194 and the URL which is accessed has the term „VPN“ in its name.

VORACLE describes a technique how the content of an encrypted VPN tunnel can be revealed. OpenVPN made some suggestions how to prevent this from happening. One of its hints is to disable the lzo compression. Guess that? It is not disabled at RUSVPNs client config and may be active during a connection. I used the question mark because the compression could in theory be disabled on server side. Nevertheless this is not a good sign to find a miss configured client configuration.

If you accept this notice, your choice will be saved and the page will refresh. 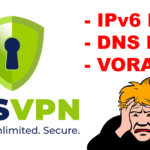